During Easter the annual carshow in Jönköping is on the calendar. The Svenska Volvoklubben is presenting a couple of very nice Volvo’s. One of those is one of the two Purple T-5R’s that exists! Colour 420. Aubergine Pearl. Or Ametistblue Pearl as they called it in Sweden.

When Volvo started developing the 850 T-5R, they experimented with a couple of colours. White, Yellow, Black and Purple. Ingvar Malander suggested the Purple colour special for the T-5R. Though two of the first prototypes were Purple, Volvo didn’t choose this colour in the end. In Geneva the introductioncolour was yellow!

The most succesfull 850-collector in Sweden, Ulf Thoren, was able to track down both Purple T-5R’s and started restoring them to the original state. One of the details for example is that in stead of the the standard T-5R badge the combined batch, that Volvo used on it’s first models, was used on this car again. You can see this badge in detail in the movie of the yellow T-5R that was made in occasion of the introduction.

This purple estate was the first car with enginecode 58. The car is registered as a 855-572 Turbo but is considered the first prototype for the T-5R. It has the original VIN code of a eXperimental car (chassis X00032) from MY 94. The car is officialy licensed in Sweden a couple of months later at 25-05-1994. Probably at that time the chassiscode was changed 200032.
Below you’ll see a couple of pictures of this unique car. If you don’t know what to do with Eastern… consider Elmia, Jönköping, Sweden!
And if the Elmia visitors are aware of the significance of this purple T-5R, it will definately end up as car-of-the-show… 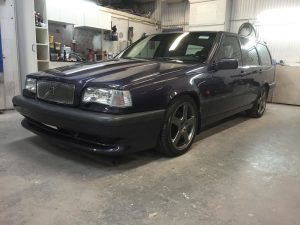 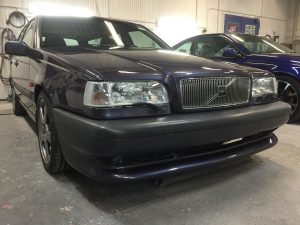 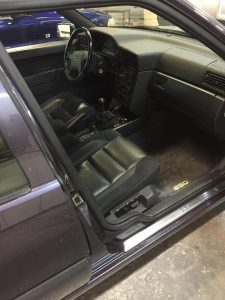 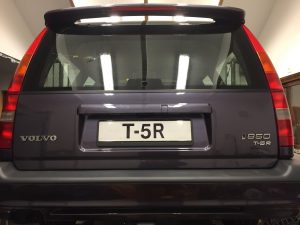